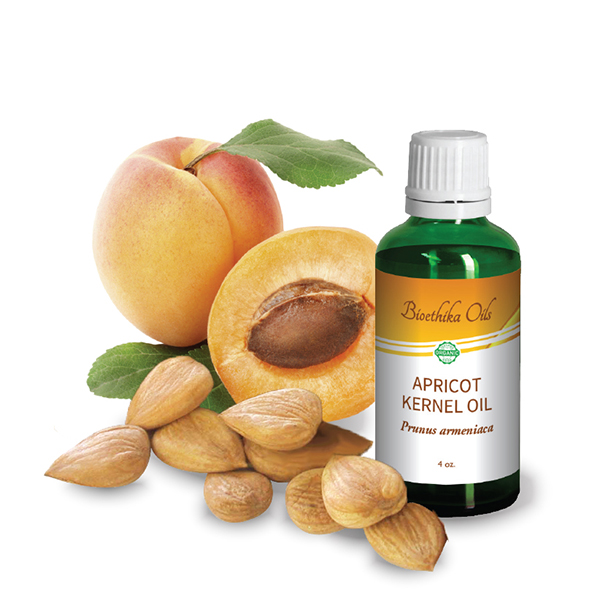 Apricot kernels are a rich source not only of oil but of antioxidants containing many health benefits.  The kernels or pits look very much like almonds but are more bitter.  The oil is sometimes used in cooking as well as in cosmetics and aromatherapy.  It has a slightly nutty flavor and makes an excellent carrier oil.  It is high in vitamins B17, E and K, both of which have medicinal properties.  Amygdalin has interesting applications but must be used cautiously when taken internally since it can be toxic when taken in excess.

We have actually been using apricot kernel oil for about the last thirty years.  Like most oils, it is nourishing and moisturizing when applied topically.  The oil closely resembles the sebum produced by the skin so it is a reasonable alternative to more popular oils such as almond and jojoba oils. It is often used as a carrier for hair oils, especially those conditions characterized by excess testosterone that inhibits hair growth.  It reduces inflammatory conditions of the skin, including the scalp, and joints so it can be used in massage oils as well lotions.

Since apricot kernel oil is moisturizing, it can relieve dryness and wrinkles.  The antioxidants may help to reduce spots on the skin associated with aging.

The exact origin of apricots is not known, but many suspect that wild apricots may first have been used in China from an area near the Russian border.  It is clear that apricots were used as both food and medicine for thousands of years.  It is believed that Confucius not only taught under an apricot tree but requested patients who were cured of serious diseases to plant five trees and those treated for more minor conditions should plant two trees.

When using apricot kernel oil as a carrier, only 2-3 drops of essential oil per tablespoon (approximately 15 ml.)  of carrier oil are needed.

For inflammatory conditions, try using Rosemary or a blend of Ravintsara and Niaouli essential with apricot kernel oil.

For hair, try adding equal parts of essential oil of Ylang Ylang and apricot kernel oil to your shampoo, about five drops of each to an 8 ounce bottle of shampoo.

Expeller pressed certified organic Prunus armeniaca oil, made from the kernels of apricots grown in Spain.